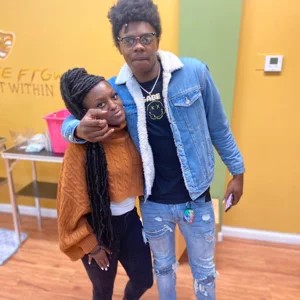 Tracey Benz is a Successful Rapper who was born and raised in Chicago. He had a hard time growing up. His Family hasn’t graduated from College but they work hard to provide for the family. He is working to become the first college graduate and is now learning at Illinois State University. Especially after his older brother Deante died, He started taking the responsibility to take care of his family. This made him rely on music to provide for his family. His goal is to take his brother’s responsibility well by getting rich.

He always had a dream to become a Famous Rapper. He used to write poetry and freestyle with his friend when he was young. He decided that he should seriously start working on this dream around November 2020. He started making beats and rhythms. He hasn’t written any rapping lyrics but made beats. The Arge to rap started when he lost his older brother Deante due to Covid. He is in the studio rapping and singing about his brother so that he could always be remembered. He said that “since my brother died everything I do is for him”. The Death of His Brother made him start rapping and making music, Music helped him get through the Sad and Depressing Moment. What made him continue working once he started getting attraction to major pages like kollegkidd and other radio outlet pages, the comments made him realize his potential.

Tracey Benz has been working passionately and without rest since he began. His goal is to be a Stardom and perform in Paris. It looks like his journey is heading in that direction. He released 15 singles in just one year from the day of his first released song. This is because he knows and gives attention to consistency. He recently released Applying Pressure just a few days ago on Nov 24, 2020. The First Song he released was Tom Brady on Nov 28, 2020. He love his songs Letter to Deante and Tear of Gold because he released and let out his pain writing those songs. He often writes his songs in his car after smoking weed and going hotbox. He always tries working on different styles so that he would entertain every audience. But He is more focused and switches between drill and melody. Some of his songs are Letter to Deante on Oct,15,2020, Tears of Gold on Nov 7, 2020, Running His Pockets(feat. Lil a dacappa) on June,8,2021, Do Right on Aug,22,2021, and Others.

I do melodic drill meaning I do drill songs I. Catchy beats that always has a line that sticks

Hoe Stu, I smoke weed and go hotbox and write my music in my car all my hits or majority came from like that

What’s your favorite project so far, and why?

I think I’m going to get more poetic and creative in my writing where I speak strictly real shit in.