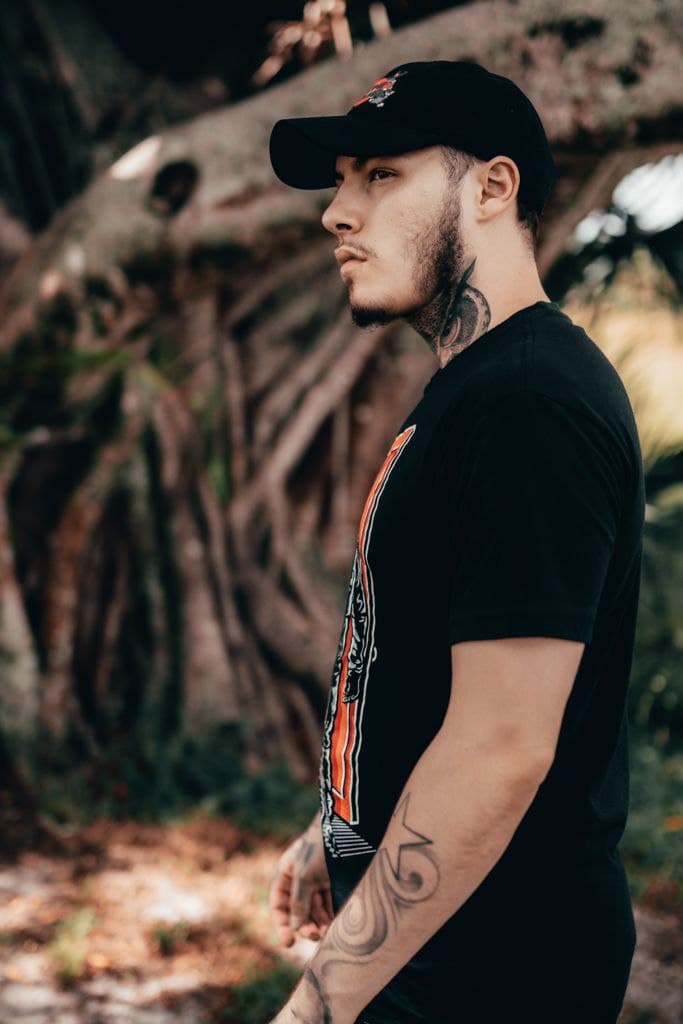 Joseph Calderon was born from his Irish Mother and his Puerto Rican Father in Allentown which is a small town in Pennsylvania in 1994. Due to having a young mother and a prisoner father, he was adopted by his grandmother at the age of 3, on his fathers side. His grandparents moved him to Orlando. During this period of his life, he was interested in playing basketball and playing video games. Because he was far from his parents, his grandparents tried to give him everything they could so that he would be happy.
He was surrounded by older people and didn’t know how to act. He preferred to be alone and enjoyed the Spanish music which his grandparents would always play. They used to play every well known
Spanish music artist such as El Gran Combo, Celia Cruz, Tito Puente, etc. He enjoyed spending his time trying to imitate Michael Jackson to his fake audiences just as every kid would. He enjoyed listening to Latino music, pop music, and Michael Jackson Songs. I fell in love listening to hip-hop beats when I was 9 years old when I heard NBA street volume two and the song They Reminisce Over You
(TROY) by Pete Rock and C.L. Smooth. Middle School was a game-changer, I completely fell in love with hip hop music. It was the time when I was introduced to Tpain, Akon, Boosie, Yung Joc, Plies, and many incredible artists. These artists are my inspiration to become the person I am now. Tpain and Plies were my biggest inspiration that I even made my version of their song Shawty later in my career..
This whole career just started with a simple talk on the lunch table when I was in 10th Grade. I was sitting with a kid named Phil aka Kid Flash, he was writing songs in his notebook. We got along easily, He asked, “who can make music?” and I replied, “I can”. I love music but I had no idea how to make it, produce it nor write it. I was very nervous when he asked me to come over to his little studio setup. It went well and we made a song called Please You. This made me fall in love with the idea of music-making. After that, I tried making music by myself and also asking for help from my friend Clarence. After that we made a couple of songs. We were young so we didn’t take it seriously. But I tried to approach other artists and rappers in school who have the same music style as me. I became close with Justin aka YoungJedi who seemed to be exactly who I wanted, we liked a similar type of hip hop music sound and style. We were just starting, we had our rap names. Lil’ Saint was my name and Jcity for him. We were just dropping song after song on Soundcloud. Our Song “In God Trust” was the most popular and most liked of our songs. We felt we had a different sound from everyone so we created a group called Unorthodox Ent Movement. This movement went on for years until I became confident to go solo as an artist. Joseph Calderon recently released Logic’s Beat. The Borat Beat was created by Logic for his fans to use. He said, “It is so different!”. I was always
compared to Logic so why not use the beat. Many have also compared me to my other favorite artists such as Joyner Lucas, NF, and Lupe Fiasco.
I was featured recently on a podcast for https://www.dagr8fmlatino.com and interviews by D’shon El Villano for this coming Halloween Music Festival in Miami, Wynwood, hosted by DJ Oski, was also featured on a podcast called Under The Radar on Ithaca College radio station where they focus on the independent artist that haven’t been heard of yet. Also had the pleasure of being featured in Slovak Magazine Plot Point.

1. BoomBap or Trap?
Boombap because it influences and motivates me more.
2. Would you ever think about creating other types of rap songs?
I would like to because I like to be versatile.
3. If you could name one rapper with whom you could have a song, who would it be?
“It would have to be Logic for sure!”
4. Are you currently under Label or purely independent?
I’m not under anyone right now. I own my own record label. KZ RECORDS LLC named after my children.
5. What is your vision for the future?
Affect the music industry and people in general. Teach them to pay it forward. One day I would like to have an arena full of people rapping the lyrics to my songs. But most importantly, to give my family a better life doing what I love. I want to fulfill my dreams!
6. Are you planning to release a new album or song in the near future?
I plan to release another 2 more songs by the end of the year. In 2022, I plan to release a couple of songs a month, and start performing more live shows, creating more fans, which I’m looking forward to!

7.What’s your background? What got you into rap music?

I’m Puerto Rican. It was being able to express myself and just being on stage!

8.How long has music been a part of your life?

Since forever! My whole life!

9.If it wasn’t for music, where would you be now?

I think I would still be trying to figure out who I am, maybe become a pro-gamer playing tournaments.

10.How did you come to realise that music was the way forward for you?

I’m an introvert so I don’t talk much. Through music I can say what needs to be said so that’s a big release for me which is why I love music!

11.If you had to sacrifice one skill, which would you least like to let go, and why?

A skill in my music I would say to rap fast, because lyrics are everything. It makes the music. So I want people to be able to understand what I’m putting out.

12.In what way do you aim to make a difference?

Being versatile, being humble and engaging with my fans. I want to give back and become a philanthropist.

Wale, he matches everything and it’s some fire fits!

14.What’s the most trouble you’ve ever gotten into?

I try to stay out of trouble.

15.Where is your career heading? What’s the vision?

Currently making 2 songs and plan on performing more live shows, creating fans and building my image! To be the chosen one, one day at a time!

16.How would you describe your style of music?

17.How do you put words on paper? What’s your creative process like?

I never write it down on paper, I should! Everything is in my phone. I listen to a beat for hours on loop getting a feel for the music while trying to get my story out.

18.When it comes to performing, what’s your style?

I try to engage with the audience as much as possible. Since I am still unknown, people can lose interest fast!

19.If you could perform anywhere in the world, where would it be and why?

Japan! I have always wanted to go there. The atmosphere and the vibe seem so amazing to me!

20.What’s your favourite project so far, and why?

C.H.P.S., that album so far is my favorite. I was going through a lot of changes in my life and I feel there’s a mix of songs for everyone in that album.

21.How do you see your sound evolving in the next couple of years?

I feel like as time progresses my sound will be way more developed on all levels, I’ll know myself more and when you know who you are you can create your own lane.