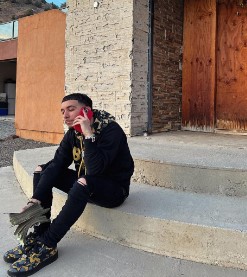 Official Icee, a young talented rapper and music artist born in San Jose. Eventhoug, he was born in Sanjose, he was raised in South Sacramento. He was just a 2 or 3 years old toddler when he moved to Sacramento with his family.

Music has been in Official Icee’s Life just from an early age. He discovered his talent when he was young, when he was a 4th or 5th grade when he started rapping and performing in Elementary. Official Icee would stay in the classroom writing raps because he was not a quiet kid in school so he use to always get in trouble & not be able to go to Recess with all the other kids.

The First Music released by Official Icee was “Had To” in 2020 and also released a video shoot by camera man IMXSEBASTIAN.  They ended up shooting the video two times because Icee didn’t like how it came out the first time.The Music was orginally made in 2019 and decided to released it in 2020. They have released 3 music with a video after that which are Heartless (Dec,07,2020), Seen it All (Aug,12,2021), You Decide (June,27,2022). I already had a following just off of my clothing line called “Rare Ghost”.

I grew up listening to rappers like Lil Wayne who inspired me to start rapping.

Music has been a part of my life since I was little, I recorded my 1st song when i was 13.

If it wasn’t for music I would probably still be in the same position I am now. I been hustling before the music, the music just got me known.

I never thought music was the way forward to me, I just made music for fun.

I wanna make a difference by inspiring others to follow they dream.

My fashion icon is me, I just be putting outfits together.

I have been in trouble multiple times, I can’t think of the time that was the worst for me.

My vision is to continue dropping music & dropping clothes from my clothing line.

My style is definitely different in my city, there ain’t a person that I sound like out of Sacramento.

My creative process is going to the studio & free-styling. I don’t write, I like to punch in & just come up with my songs on the spot.

I never performed before.

I don’t have no project out yet, I only got singles out. My favorite song would have to probably be “You Decide”.