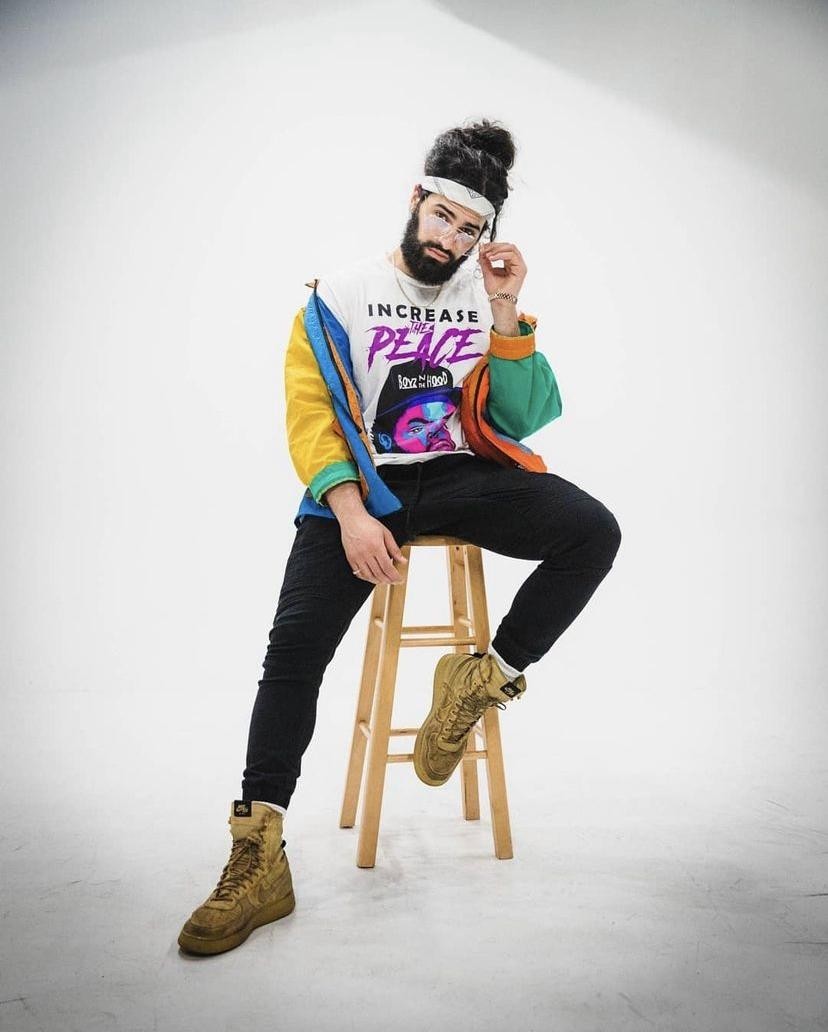 Born in Chicago, IL Ra Moody blends a unique sound, flow, and visual component into his art. At a young age, his mother exposed him to a broad variety of musical genres, sparking his interest. His curiosity for music became overwhelming, and he started learning piano, and experimenting vocally at a young age. Ra was born and raised in Chicago, but moved to Lebanon after a few year stint in the Windy City. He spent a few years in Lebanon with his mother and sisters, but had to flee to Syria because Israel invaded the country. From there, he came back to his birthplace, where he has lived since. During his time in Lebanon, music kept him grounded, and his passion for it grew immensely. When Ra got back to the states he focused on sports but an injury senior year shifted him right back to music.

Ra’s first rap album was “The College Dropout” by Kanye West and ever since then his mindset to rap changed. Ra doesn’t consider himself only a rapper but more of a lover to the sound of music, which explains why he sonically changes his sound effortlessly. Since his first rap experience, he has listened to various genres and artists throughout the decade. Since English is not his first language and Arabic is, the first music he ever heard was in a different language which led him to loving melodies in music. He truly believes music shifts in a way most artists don’t pay attention to and for that reason he’s destined for a bright future.

To start off the year a single called “New Year Same You” was released Jan 1 2022 setting the tone on how most people are still the same even when they talk about a big new year resolution game. By doing that it created a little buzz on socials which led to growing his fan base even more. He’s connected with fans across countries and states on a level where they want him to perform there, which is amazing that he’s able to connect to the world through his music. Ra keeps portal hopping through emotions and different moods to help and connect through everyone on this planet, especially with the snippets he gives and his socials attest to that. Expect more out of Ra Moody, unpredictable musician with an ear for great sound. He will be releasing throughout the year a single once a month, so stay on the lookout.

Ra is on all platforms he’s been on Shade 45, trend city radio and many playlists and blogs since he dropped his project Better Late Than Never back in 2020. He put together a 9 song project with no shortage of sonic variety. Switching from melodic rap, to soul to contemporary RnB seamlessly. After the name change from EVO to Ra Moody He released singles throughout 2021 and YouTube videos with his Cooped Up Cassette series. Ra proved he is not to be put in a box with his tape and singles and prides himself on his versatility, lyricism and overall vision.

I was born in Chicago, IL I have a mixed background of Lebanese, Egyptian and Turkish. What got me in rap was Kanye West and from there I listened to even more amazing artists and I believe were all connected through sound and energy so it’s crazy hearing that in some of my favorite songs and artist I hear the influence of others so it was eye opening to me to experience that being young and realizing it at a early stage in making music.

My whole life really so my family always had music blasted in the house, all types of genres and honestly that’s why I got exposed to those different melodies at a young age then I played piano & drums then started tapping in vocally. I had a chance to work with a well known Arabic singer when I was living overseas so it opened my mind to music in a different perspective. I say live overseas for a bit, change your lens and see it from that view. It made me who I am today, not just for music.

Back in high school I was focused on sports heavy until my injury so maybe something in that field. I also love business and being in the innovative mindset. Doesn’t matter where life takes me, as long as I have a formula I’ll be good. I better myself to better the world and I knew music was my way out to keep me away from the violent life I experienced younger. The feeling is ecstasy when I make a song and I am able to share it to the world so I would want to have that same feeling in business and any other creative outlet.

How did you come to realize that music was the way forward for you?

I had to find a way out. I really had to escape the times when I was living through the war and trauma it brought me and it shaped me to who I am. I believe we are all looking for a way out, out of the matrix, out of our head, out of our own way and out of the system. Music is that outlet for me, communicating human emotions through sound and energy.

See that’s why I call myself a portal hopper because I wanna connect with everyone with a different emotion through a different sound. Anything to do that and I’m happy, there’s not a lot we can control but the things we can control can change the world and people around you for the better. For me that’s the goal to connect to the masses with different moods of music.

I adopted a lot of different styles throughout my life with different cultural exposure from musicians to fashion heads. Especially living overseas, seeing that side of the world with what they eat, what they dress like and how they live shifted my mindset to think outside the box not just in music but in fashion as well.

I definitely have to plead the 5th on that one.. I’m sorry haha

It’s in the The Take Over stage that’s all I can really say right now.. Take over everything connected with the masses through my music, see the vision is always evolving, adapt or die right? so I see something others find humorous and I know I see the bright light at the end of the tunnel. I just make sure to learn everyday what’s happening stay ahead in

I’d say I’m a genre fluid artist. Any mood and any sound I connect to just pours into my music so my songs are able to reach and make people feel something. Just like how each conversation is different from the other, I treat my music approach the same way. It’s a conversation you are having with the beat and how you are connecting to it at that moment in time.

How do you put words on paper? What’s your creative process like?

I usually don’t write anything down right away. I don’t like to overthink in the studio. I tap into my higher self and grab what feels right for the track. I usually store a lot of thoughts and emotions in my arsenal and pull out what’s needed for that energy. I always hear space in a beat or when I’m making it I know exactly where my vocals need to sit. The feeling comes to you when you tap into it, that’s really the best way to say how my creative process comes to me.

My style for that is loose, just a free spirit feeling everything around me so I adjust my performance to the mood of my songs. I really wanna connect that energy to my fans by keeping control of that wave they’re riding on. To do that, I do the same thing I do in the studio, which is stop overthinking and let it flow through me. Once I conquer that method of style every time before I step on stage the performance is authentic as it can be. I usually visualize movements and atmospheric ideas when I’m making the song so it’s really my subconscious that knows what to do right when I hit the stage.

Red Rocks the view looks amazing and that mars atmospheric look has to feel incredible. Look up the view to that venue, it’s something to witness and you already know performing there would feel crazy, out of this world. My thing is I wanna connect with everyone in some way through my music so performing a world tour and meeting all my fans would be that dream that’s coming true very soon. Taking over my city and performing in the heart of it then the Take Over of the world.

Honestly I’m always gonna experiment with sounds till I cant anymore. Versatility is needed in this music world and I have plenty of tricks I’ve been working on to show my magic in these next couple of years. I am open minded when it comes to changing or listening to different music, expanding my horizon plus I take feedback in a healthy way but sometimes I see the vision a certain way and nobody can tell me otherwise. I follow my gut because my intuition never lies to me.